Missy Hiss had her remaining stitches removed today. Only two were left, the others had worked themselves out.  She did great! She wasn’t very cooperative when getting in the carrier but she’s had a quite a few vet visits recently and can’t say they were fun visits so I cant say i blame her. I’d probably be the same way. 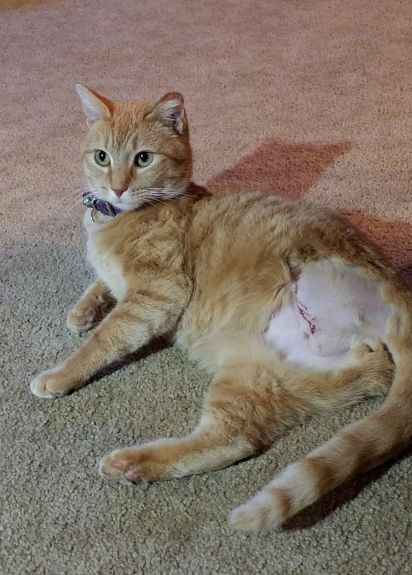 Here she is just relaxing after a tiresome day of lounging on the couch. Just look at those eyes!

We’ve made a few modifications for her. Carpeted pet steps on either side of the pet gate to the cats room. The room has to be kept gated to keep my dog out of the litter box. He’s not real happy with steps so for now we’re good on that for now, but Miss has to get in and out. At first she went under the steps but now she’s going up and down with no problem.

Also have pet steps by the couch but for now she’s bypassing them and just crawling up. Thank goodness for furniture covers..

She gets where she wants to go just instead of jumping she crawls her way up.  Which is fine but when she crawls up my legs to get in my lap..ouch!! Lol

She can’t do long distance jumping, like from coffee table to couch. I have shelves on the walls for the cats which she’s not able to get to right now but will soon be adding a few lower so she can get up to them. Gotta have a high spot to view her kingdom!

So, life is good. She’s happy and healthy and healing well! 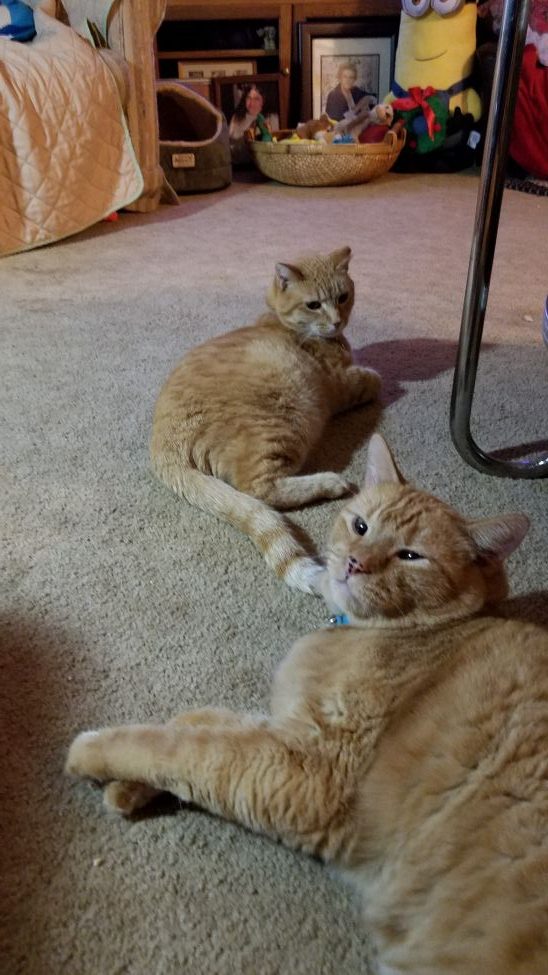 Missy and her buddy Morton.

Missy is doing great. Bee bopping around the house. Everyone is getting along pretty well. My siamese Mia is a bit of a grouch so she’s being kind of hissy at times. 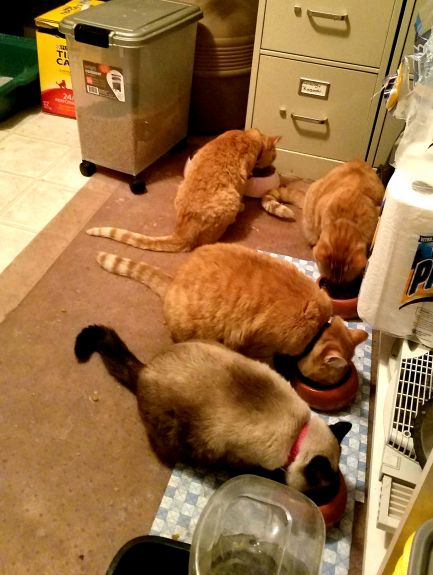 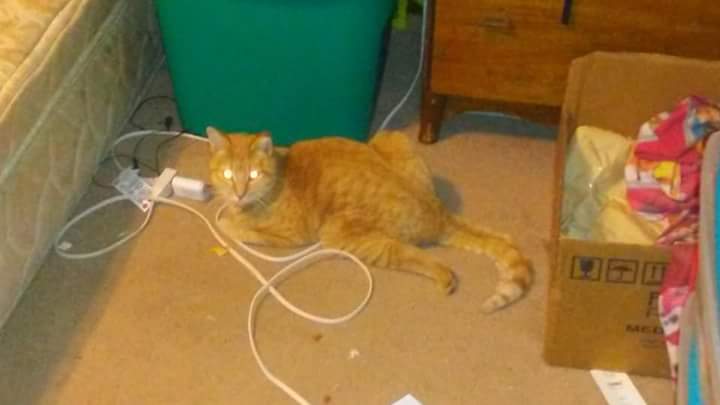 This was the picture that broke my heart. Posted on facebook, on a swap shop. Needing a new home. She was injured and they couldn’t afford to take her to the vet.

So, I contacted them. Said she had been gone 4 days and came home dragging her leg. She was an indoor/outdoor cat, mainly outdoor.  They said they had been told her hip was out of place. 2 or 3 years old, spayed.

I said ok. We met and I picked her up. After talking with them found out the injury was weeks old. The actual reason they wanted to rehome her is they were tired of cleaning up after her. They had put her in a spare room, without a litter box.  Also it wasn’t a vet who said her hip was out of place, it was a friend.

Her first day with us was November 21st, 2017. Discovered she had no use of, nor feeling in her left rear leg.

The next day was her first vet visit. Given the once over, blood work, the works.  Her hip was broken, also broken right scapula. All the breaks had healed.  No other injuries, not a scratch anywhere. Blood work was good.  Decided to just take her home and see how she manages with her leg.

She stayed in a spare bedroom since I have 3 other cats. She was in there about a week before I moved her to the “cat room”. The room with litter boxes and food, that has to be gated due to my dog.

It was obvious the leg was a hindrance. She sat on it, was rubbing the fur off the top of her foot from dragging it. Just seemed to get in the way so I called the vet and we discussed amputation and decided that was the best option. Date was set for Dec. 7th. 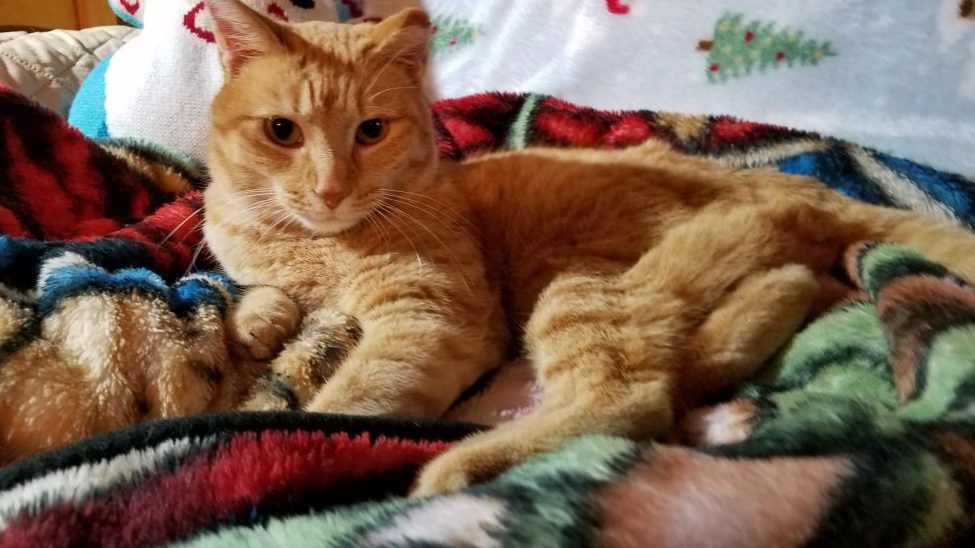 Here she is the day before surgery, cool as can be. I was nervous but she was pretty non-chalant about it all. 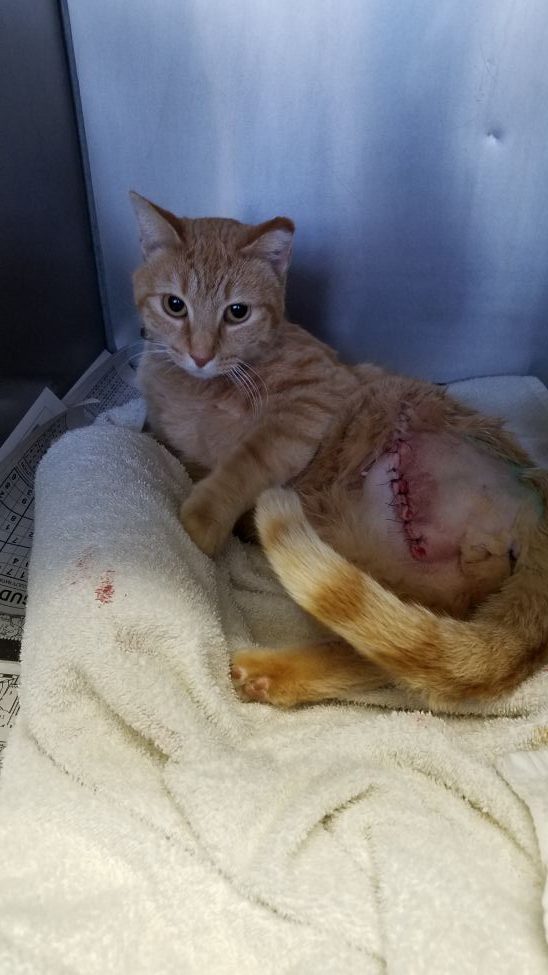 A few hours after surgery. Surgery was at 11 and this was about 4:30. She was up and trying her best to get out. She was still a bit wobbly but doing fantastic.

During surgery the vet found that her femoral nerve pretty much looked as if it had been sliced in two.  Only good thing is she has no feeling where the actual incision is.  Feeling stops about a half inch from her spine down the leg. She does have feeling in her tail and full use of it, but from hip down on the left side, nothing. So she had some discomfort from surgery but no severe pain.  There is no irritation from the stitches, so she hasnt seemed to notice them at all. 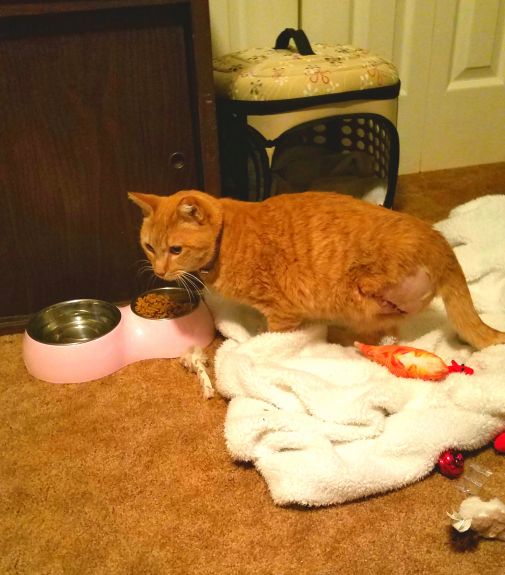 First day home. Missy came home Dec. 8th. She was ready to be home! All the other pets gave her a good sniff and she settled in. She ate, used her box, the settled in for a good nap.

The next day, diarrhea began. She was given oral antibiotics to take, so I knew what the problem was. The next day I didn’t give them to her and by that night her stool had firmed up. Called the vet the next day on Monday the 11th and took her in and she got a shot of antibiotics so she wouldn’t have to take any oral. She’s a small girl and severe diarrhea after surgery wasn’t a good thing!

Today is day 9 after surgery and she’s doing fantastic. I got carpeted pet stairs for both sides of the gate so she can now have free roam of the house. My dog thinks stairs are evil so we’re safe for awhile there. She’s now one of the pride of my cats, everyone gets along. She has chosen her favorite sleeping spot on the couch. She can now jump on the couch, but anything higher she can’t do yet. She is running, playing, and enjoying life as a total house cat.

She goes back to the vet the 21st to have her stitches removed.

So, in less than a month she’s gone from an outdoor cat to a total indoor cat. New home, new cat housemates and a dog buddy, and to top it off, had a leg amputated. All that and she’s as chill as she can be and enjoying life.

I had no intention of getting a fourth cat, but this was meant to be.

About Your Tripawds Blog:

New Tripawds Bloggers: Please review your default first blog post at left for lots of helpful links for getting started with your blog or review the Help Videos in your dashboard. Edit these widgets from your Appearance settings to remove this notice, upload a custom header photo, or choose from 130+ themes, and much more!